In 2019-2020, the Tigers saw 8 of its 9 teams qualify for the DSTHL playoffs, 4 teams advanced to their division Championship games and 2 teams brought home State titles.

After finishing the DSTHL regular season with a record of 20-1 and outscoring their opponents 108-12, the Tigers 16U AA have proven they are a force to be reckoned with.  The 16U AA team locked in their spot in the league playoffs & TAHA Tier II 16U State Tournament in Farmers Branch in early January and finished the season as the #1 team. In the State Tournament, the Tigers swept the competition, finishing round robin play 3-0 and advancing to the Championship Game where they brought home the State Title after a resounding 6-1 win over McKinney.  The Tigers also brought home several tournament Championships, including Dallas Stars 16th Annual Texas Shootout, 2019 LGS Motown Classic, and 2020 LGS Kennedy Memorial.

With the TAHA State Title in-hand and their #1 16U Tier II National ranking, the 16U AA team will represent the Tigers and TAHA at the 2020 USA Hockey Nationals in Troy, Michigan in April.

Coming off an exciting season last year with a trip to the 14U Tier II Nationals in South Bend, Coach Kaebel had high expectations for our 16U A team and they delivered!  The team went 19-0-0-1 in the regular season with their only loss coming in a shootout and outscoring their opponents 124-24.  The team qualified for the DSTHL playoffs in Mansfield where they swept the round robin games and brought home the Championship with a 4-2 win over McKinney.

Congratulations Texas Tigers 16U A

The 14U AA Tigers finished out their season 10-6-1-3 and outscored their opponents 88-46.  They finished in 5th place, qualifying for the DSTHL playoffs & Tier II 14U State Tournament in Farmers Branch.

Coach Hesse's 14U A team finished league play in 2nd place with a 15-3-0-2 record and outscoring their opponents 83-37.  With their strong finish in the league, they qualified to the DSTHL playoffs in Mansfield.  The team went 1-1-1 in the playoffs round robin play to advance to the Championship game where they lost 4-3.

Congratulations Texas Tigers 14U A

DSTHL 14U A Playoffs Finalist!

Our 12U AA team finished the season in 3rd place with a 14-3-0-3 record and outscoring their opponents 73-39.  With their strong performance this season, they qualified for the DSTHL State Tournament in Farmers Branch.  During round robin play, the team finished 1-1-0-1 to finish out their weekend.

Coach Mudgett's 12U A team finished their season at 15-5, overwhelmingly outscoring their opponents 138-38.  With their 3rd place finish in the league, they qualified for the DSTHL playoffs in Mansfield.  The 12U A team was successful in finishing as a Finalist in both the Dallas Stars 16th Annual Texas Shootout and Lone Star Invitational - Cotton Bowl Edition.

Congratulations Texas Tigers 12U A

DSTHL 12U A Playoffs Qualifier!

Our 10U AA team finished off the regular season in 2nd place with a 16-3-1 record and outscoring their opponents 95-38.  In the DSTHL State Tournament in Farmers Branch, the 10U AA fought hard with 2 overtime wins to advance to the Championship game before losing in OT.

Our littlest Tigers finished their first season of travel hockey with a 12-7-1 record, outscoring their opponents 122-99 in league play and qualifying for the DSTHL playoffs in Mansfield.  In tournament play, they finished round robin play in the Dallas Stars 16th Annual Texas Shootout 3-0 before losing in the semifinal game.  In their final tournament of the season, they finished 4-0 in the round robin for the Dallas Stars Top Shelf Tournament and advanced to the Championship Game.  We are so proud of what our youngest Tigers have accomplished this season and excited to watch them grow and develop!

Congratulations Texas Tigers 10U A

DSTHL 10U A Playoffs Qualifier! 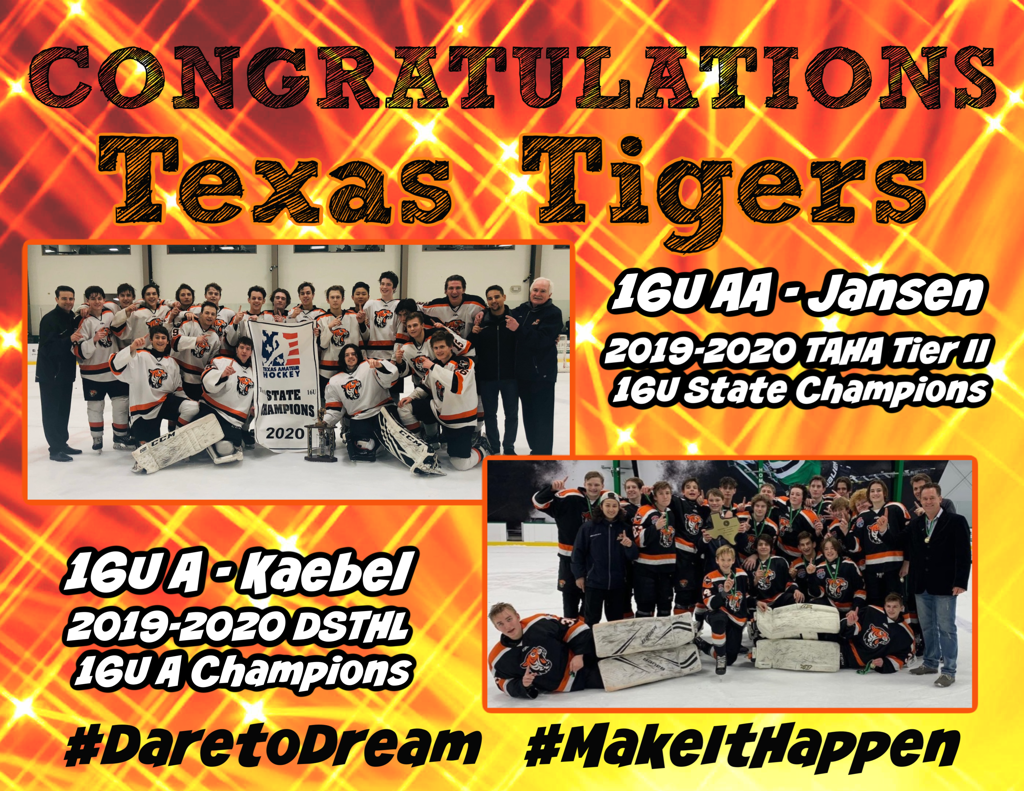